The fastest pumptrack riders from around the globe gathered in Lisbon, Portugal, October 15-17 for the 2021 Red Bull UCI Pump Track World Championships. The event showcased the exploding popularity of the sport with more than 65 international riders–from Olympians, freestyle riders, and track cyclists to four-cross racers, BMXers, and mountain bikers. We were thrilled when the Union Cycliste Internationale, the cycling world’s governing body, officially sanctioned pumptrack riding as a discipline in 2019. And pumptrack sports are gaining even more visibility with the Olympics including progressive cycling events that crossover with pumptrack riding. 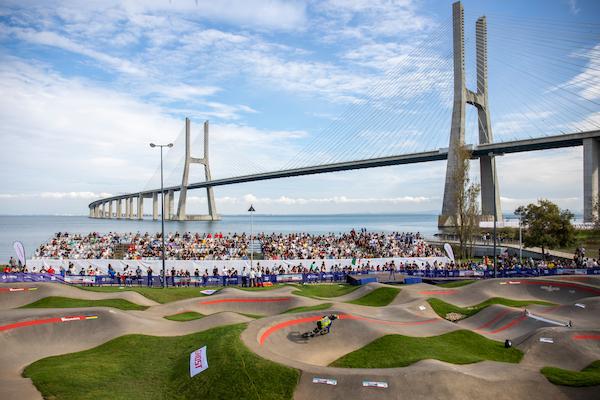 The world championships were canceled in 2020 due to COVID, so Velosolutions, Red Bull, and the UCI made the decision to combine the 2020 and 2021 seasons. Athletes who qualified in 2020 were eligible to participate in the 2021 championships. Some competitors had been waiting for the 2021 contest for over a year, so athletes and fans alike were eager to get back to racing.

Newcomer Aiko Gommers of Belgium wowed the crowd with her speed and precision to take the women’s gold medal, and Eddy Clerté of France nabbed the men’s gold in decisive form, dominating every round of the men’s competition. 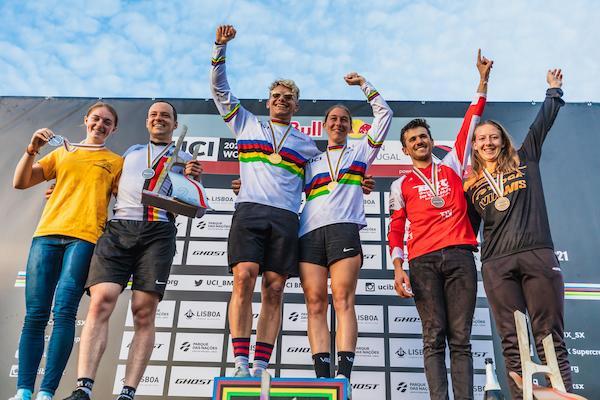 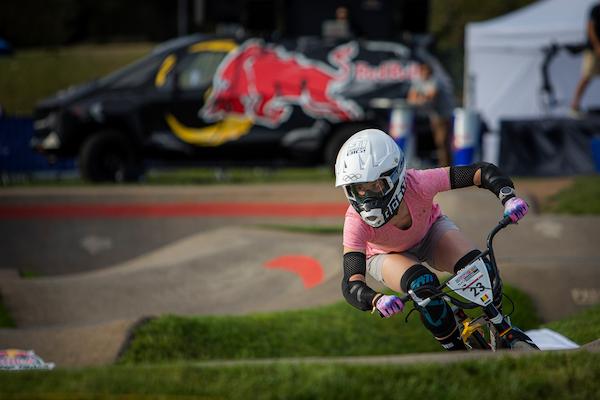 In the beautiful waterfront Parque das Nações, with the spectacular Vasco da Gama bridge in the background, racers faced a fierce test of their skills on the brand new track built for the finals by Velosolutions. Stretching nearly 300 meters through deep rollers and high berms, the track is steeper, more complex, and longer than most of the qualifying pumptracks. It requires not only incredible physical stamina from the riders but also perfect technical performance.

On the eve of the championships, the Last Chance qualifier provided anyone who hadn’t been able to qualify in a regional race one remaining opportunity to make it to the final rounds. The following day, the championship rounds were packed with eye-popping speed and skill, exciting rivalries, some surprising early eliminations, and a few gnarly crashes as the athletes vied for a chance to win the legendary rainbow-striped jersey. 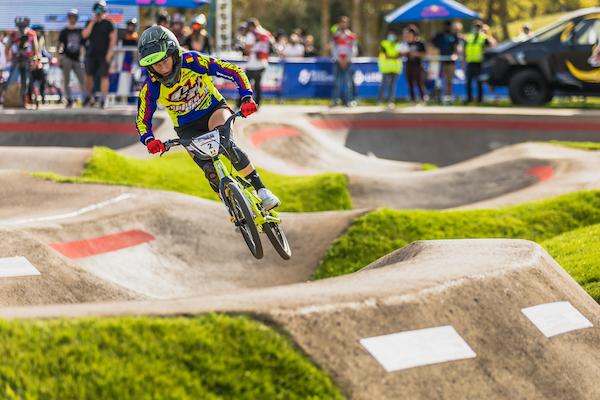 The women’s round of 16 included a pair of twin sisters, Aiko and Robyn Gommers (must be some strong biking genes in that family). The second competitor to ride, Aiko broke the 30-second barrier with a 29.6-second lap. Defending world champion, Payton Ridenour, raced fifth and jumped into second place with a quick lap despite catching a little extra air. Christelle Boivin and Shealan Reno crashed on their first laps, but both were able to come back and put down a clean lap, Boivin managing to make the top-eight cutoff. Only 1.2 seconds separated the top eight riders.

An eclectic mix of riders and bike styles faced off in the men’s round of 16. Eddy Clerté, the favorite coming into the final rounds, rode a BMX bike; defending pumptrack world champion, Tommy Zula, rode a mountain bike; and Niels Bensink rode a custom-created bike with 22-inch wheels. Clerté rode first, setting the bar high with a 27.1-second time, while Collin Hudson thrilled the crowd by jumping a huge gap. Brady Kincheloe crashed into fellow rider Loris Aeberhard exiting the track, and luckily, both were okay.

In the round of eight, the women’s race was decided in the first lap. Gommers, Von Niederhausern, Ridenour, and Smulders took the top four places, respectively. Though all eight women’s times fell into the 30-second range in the first lap and despite bold efforts, none of the racers was able to better her standings in the second or third laps. 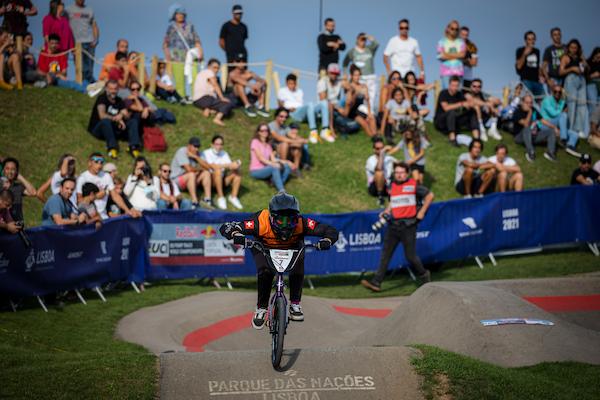 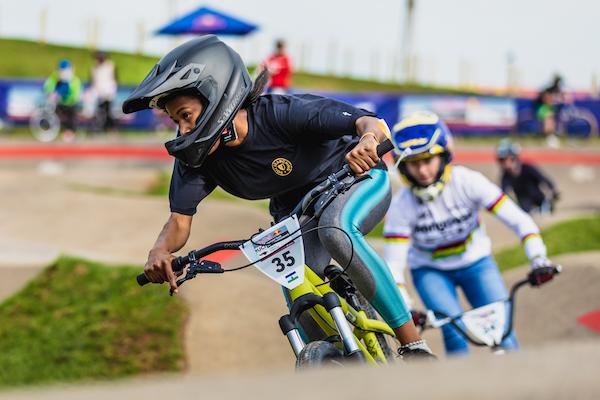 Eddy Clerté started the men’s round of eight with the fastest time ever on the track, 26.8 seconds. A technical mistake in Zula’s first lap cost him, and in an unpredictable turn of events, the defending champion was knocked out before the semifinals. Clerté, Schaub, Dupont, and Bensink qualified for the men’s four. 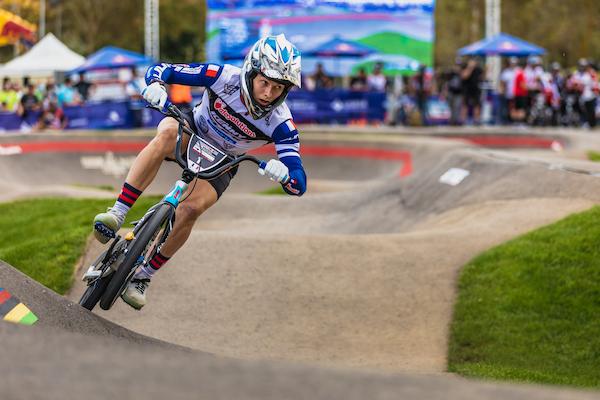 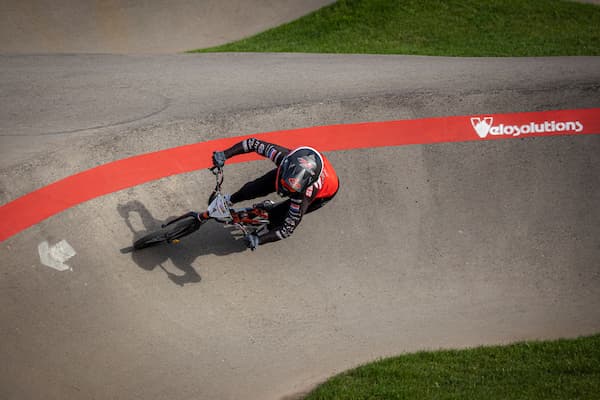 The women’s round of four saw Gommers again taking the top spot, as she did in every round of the day. Ridenour relied on airs to save energy and secure the second spot. Von Neiderhausern fumbled her first lap, straying onto the grass, but was able to ride a clean second lap and beat Smulders for third place. In the small finals, a one-lap battle for third and fourth place, Von Neiderhausern won the overall bronze and Smulders took fourth place.

Clerté upped the ante in the men’s round of four, breaking his own lap record with a 26.7-second time. Schaub was fast and consistent, maintaining his second-place spot and making the finals. Bensink took a big line with a gap jump in his first lap, then made a second-lap attempt at the top two but couldn’t slip in. He held on to third with Dupont in fourth. Bensink’s efforts completely gassed him, and he was unable to race in the small finals. He rode an honorary lap to wave at the fans, and Thibault raced to the bronze. 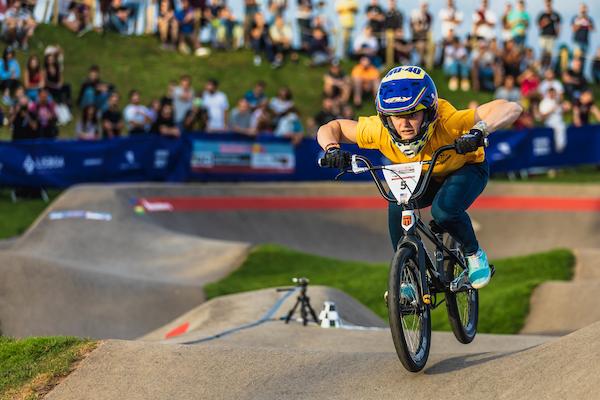 Defending champion, Ridenour, and rookie Gommers went head to head in the finals, in which riders have only one chance to put up their best lap time. Though it was late in the day of a massively demanding physical and tactical contest, both women were able to pull off some of the fastest times of the day. Ridenour rode a smooth lap with her signature airs and 30.1-second time, taking the silver. 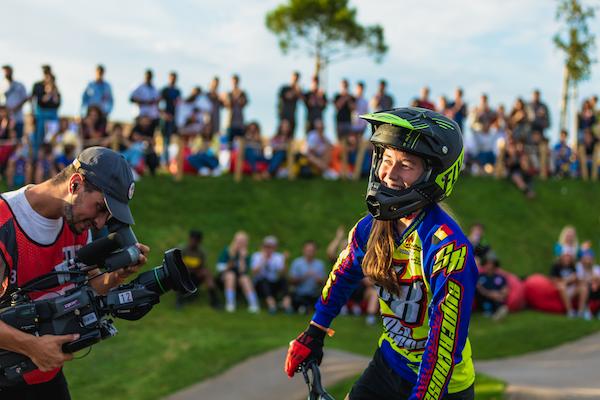 Though she has only raced pumptrack for one year, 17-year-old Gommers crossed the line in 29.7, capturing the crown from Ridenour and becoming the 2021 women’s pumptrack world champion. Her time was only five-tenths of a second behind the men’s third-place finisher. She rode a victory lap with happy tears in her eyes while her twin sister Robyn cheered. “I just came here to have fun, and see what I got, and I just won. I have no words!” she said.

Clerté and Schaub faced off in the men’s final, exhausted but ready to give all they had left in one last lap. Schaub rode a strong race but lost momentum on a series of rollers. The German took the second place podium and proved, as he said he wanted to, that “Germans are fast.” 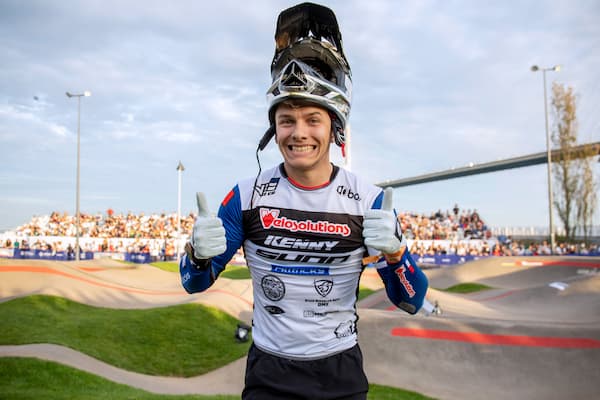 Clerté pulled up in his recognizable white golf gloves and, despite a few small errors, raced another sub-27-second lap in 26.9 to become the men’s pumptrack world champion. After his winning lap, he ran over to his dad to give him a huge hug and share the victory. “You know, I’ve been thinking about celebrating with my dad for three championships in a row now … and to celebrate with my dad first--it was something special,” he said. 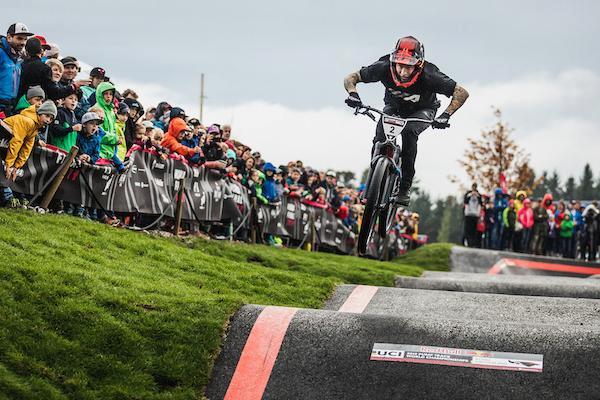 The world championships topped off an exciting season of racing that included qualifying events all over the world, taking place in 19 countries across Europe, North America, Africa, South America, Oceania, and Asia. Competitors comprised a diverse group of racers, including riders from more remote parts of the world who had, until now, never had the opportunity to race anywhere but their local tracks. 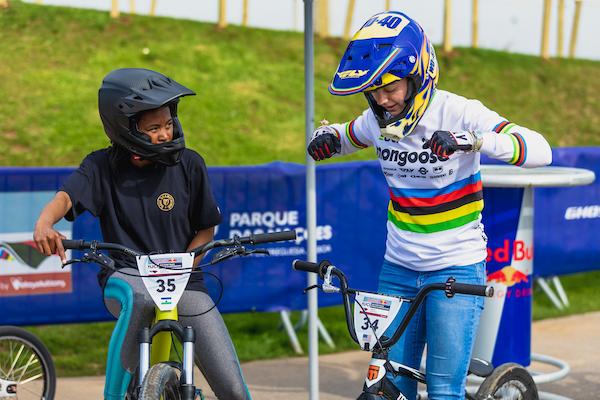 Khothalang Leuta, star of the film The Fastest Girl in the Village, had been previously training on borrowed bikes at her village's local pumptrack in Roma, Lesotho. Qualifying for the world championships provided Leuta her first opportunity to fly in a plane, race against competitors from all over the world, and get her very first pumptrack bike--a well-deserved gift from Specialized.

Two other cool things about the Red Bull UCI Pump Track World Championships that merit a mention: 1) The prize money for the men’s and women’s winners is equal. Stand up. 2) You don't need the support of a full team to enter. The race series is open--if you qualify, you win an all-expenses-paid trip to the finals. The series is designed to allow any racer from any place or any background to participate. The event comes with all the support athletes need--mechanics, physical therapists, meals, and lodging.

So what are you waiting for? Head out to your local pumptrack and start training for the 2022 world championships! Qualifying events are held all over the world and entrance is open to anyone who wants to give it a try. Information on the 2022 qualifying races and championships will be regularly updated here. Here are some helpful links: