A bike commuter's dream: La Ciclovía in Bogota is a popular highway open for cyclists on Sundays since 1974, but during the pandemic has been opened for cyclists every day. (Photo credit: Ciclovia Bogotá Facebook.)

In the midst of COVID, The World Health Organization has announced that the safest way to travel is bicycling and walking, and the people have listened. Bike sales around the globe have soared, leading to a supply shortage, and cities from Philadelphia to Manila have been scrambling to improve infrastructure to support this suddenly very popular transportation type.

Why is bicycling suddenly so popular?

For those who depend on public transportation to get around, the next most accessible option is a bicycle.

Also, with gym closures, park closures, and other workout options restricted, people are dusting off or buying bikes to stay active and have fun safely.

From mom and pop cycling shops to big box retailers, the increased demand has caused bike inventory to dry up. One store in Brooklyn, NY had a 600% increase in sales compared to the same period last year, and bike manufacturer Trek has sold out of most of its 2020 inventory.

Bikes below £1000 are highest in demand, but stationary bicycles, electric bikes and bikesharing operations are also experiencing a volume swell.

The COVID crisis also caused manufacturing shutdowns and capacity reductions in Asia, where a significant proportion of bikes are produced, further compounding the global shortage.

The supply shortage has led to another unexpected outcome; bike shops have been slammed with service requests to fix their neglected bikes. Peter Lazarus, cycling chief for sports retailer Decathlon, told the BBC that demand for spare parts increased five-fold in May compared to May of 2019, and a cycling store owner in Queens, NY told a line of customers outside his shop that those interested in bike repairs could expect to wait about three weeks.

Cities are opening temporary bike lanes or planning permanent ones. 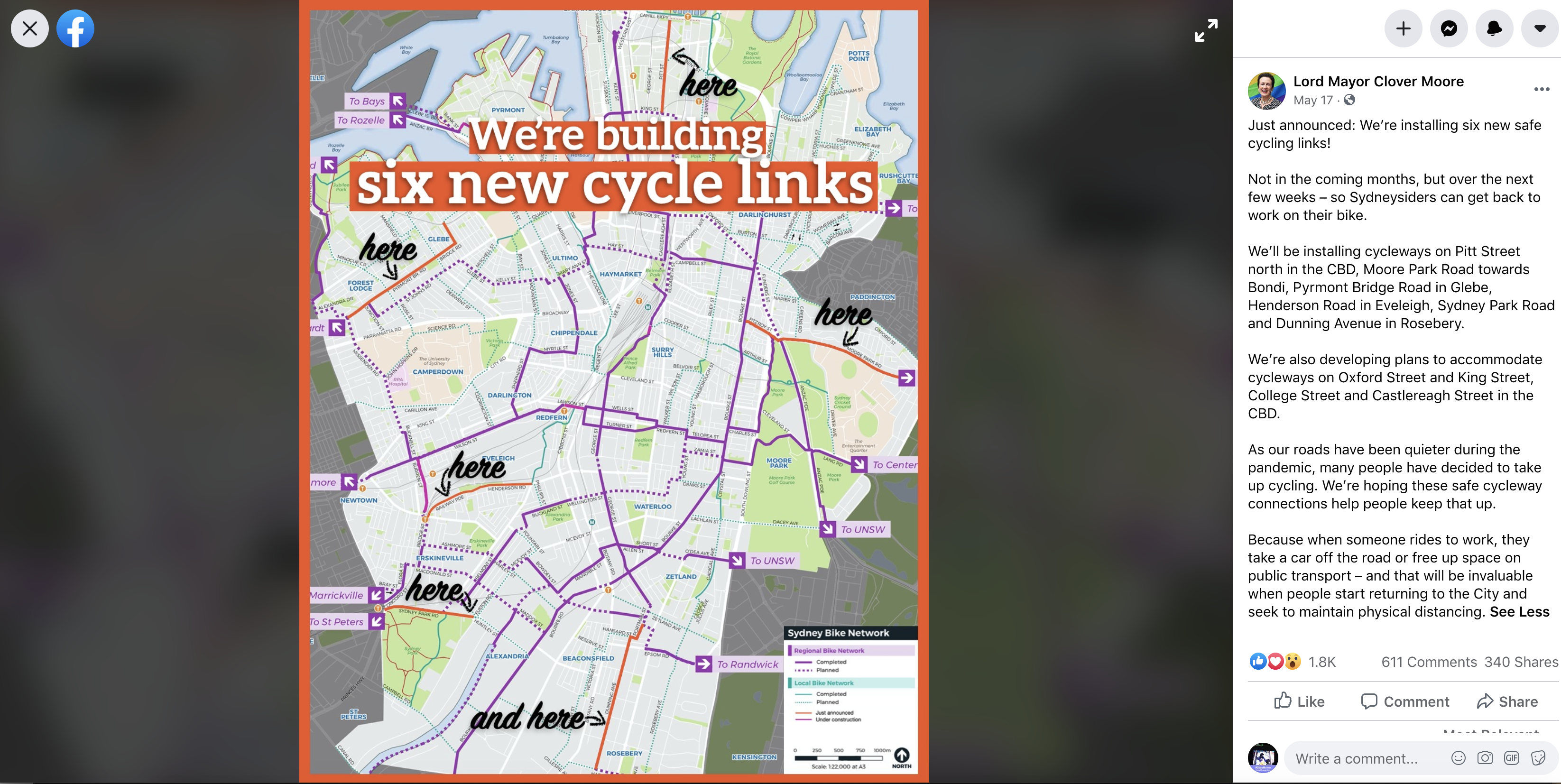 A Facebook post on May 17 shows six new cycleways Sydney, Australia is building immediately during the COVID-19 crisis in response to the increase in cyclists.

The influx of bike commuters has caused mayors, urban planners and health officials to rapidly create safe cycling infrastructure. Bogota, Colombia’s “la Ciclovía” is a road normally open to cyclists on Sundays, but is now open all week for bikes as part of their immediate effort to create 75 km of safe, temporary bike lanes.

Pumptracks may be the perfect recreation and playground solution during the pandemic.

As manufacturers of modular pumptracks, we’ve been excited by the increase in biking and biking infrastructure. We’re passionate about the exhilaration that comes from riding and building healthy communities; it's what led us here. Our last post discussed playground innovations, but obviously many of these awesome spaces are closed right now. When researching this article and considering best practices to reduce germ transmission, we realized that pumptracks and even more specifically, modular pumptracks, may be great additions for municipalities seeking safe recreational solutions. Here are a few reasons we believe this:

We all need more access to healthy activity, especially now. Pumptracks and modular pumptracks should be considered good bets for those seeking viable options.

What will be the impact post-pandemic?

It’s hard to say what these changes mean for the long-term. Besides some permanent infrastructure plans discussed above, surveys of those newly adopting the bicycle as their mode of transport indicate most plan to continue riding beyond the end of the pandemic.

Experts in environmental and public health are capitalizing on this unique moment to point out the many benefits of these behavior and policy shifts on climate change and our physical health. We already know that having access to a nearby pumptrack is very important to reap their many benefits. The same is true for biking infrastructure; permanent behavior change requires permanent solutions for these pandemic cyclists. Imagining a world with prevalent cycling highways and a pumptrack in every neighborhood certainly makes us hopeful for the future.

In the meantime, we’ll be excitedly (and perhaps a tad optimistically) monitoring the developments and impacts, and continue reporting on them.

Have you seen new bike lanes or cycling routes in your city? Have you been impacted by the bike shortage? Have you been biking to work or do you frequent a nearby pumptrack? How are you staying healthy? Tell us in the comments. 👇